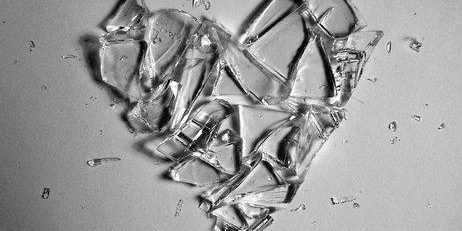 Last night I watched one of the strongest people I have ever known become completely and utterly broken. What I walked into, I don’t think anything could have ever prepared for me for. I knew they were hurting. I knew they never opened up to anyone… but they called me because they needed someone there. I am grateful I could be the one they felt safe enough to be that vulnerable around. I am grateful I could be there. I was just so unprepared but I could never be prepared… not for what I saw… not for the pain I felt… not for any bit of it at all. But I’m glad I was there.

To see someone you have known for almost 2 decades, who was SO STRONG, so altogether, so positive… a hero in my eyes… now completely come undone and shattered beyond belief. All they wanted was for someone to be there… for someone to hold them as they cried endlessly without saying a word. I was lost. I desperately wanted to fix it… to make the pain go away. But I kept remembering how I had felt in those times… there is nothing anyone could say to fix it… you just needed to not feel alone… to be held while you cried. I hate feeling helpless when someone is hurting but if that’s all I could do, then that’s what I did.

I won’t mention who it was or exactly what happened. I just know that it’s something that I don’t know if I’ll ever be able to forget. That utter brokenness. That incredible helplessness in not being able to do anything. This indescribable fear. I have seen so many people devastated, broken and crying… just not like this. There are no words. My heart is so broken and honestly, I am petrified… terrified… shaken to the core of my being.

If I could rather carry their brokenness for them, I would do it in a heartbeat… but I can’t. I hate it. I despise that fact. I would do anything to trade places. Rather me break than them.

I know as I held them, I could feel the pain… and I could feel them drawing comfort and peace from me. Rather strange experience but not one I haven’t encountered before. Apparently that’s what happens when you’re an extreme empath… you trade. But I know that still doesn’t erase their pain… but for the moment, it eased it a bit.

I wanted to cry so much but I had to hold it together, for their sake. I had to be strong. But when I left, I cried… I sobbed driving back. I was petrified… and paranoid beyond belief that something bad is going to happen. I needed help because I am only one person, so I called others who I know I can trust. They broke. They didn’t know what had been going on. We might not be able to erase the pain but at least we can erase the feeling of loneliness through it all. That, I think, is the worst part when you hurt… feeling so alone when you’re broken.

I know the other thing that ran through my mind, as I drove last night, is that THIS is why I had chosen to speak… to open up about my past… to become vulnerable enough to show people the pain and that you can overcome it… because most people don’t open up anymore. They live in their pain… alone. I had started wanting to backtrack the last few days… to close up and not tell my life stories… Who honestly would want to hear it? What good would it do? But, in holding my friend last night, they had said that they know I understand pain… I also tell no one… I also go through it alone… and that they find strength through me because of what I have been through. Then I thought of the countless messages I had received because of my books… from my life experiences I had related in person… person after person found strength. In opening up and becoming incredibly vulnerable gave others strength to carry on one more day… one more moment at a time. Even though I would EASILY trade places with people… take their pain so that they have none… I know it can’t be done, but if being this vulnerable helps, then I will carry on.

I will just never understand why good people go through so much pain. This was a harsh reminder of how many people wear masks in public… to show they are okay… only to go home and unravel into their complete and utter brokenness… alone. How many are actually truly happy anymore? I could probably be accurate in saying “no one”… but we wear masks in public, hiding the shattered fragmented pieces of our hearts behind it. It’s all left me feeling hopeless and helpless… but still determined to try. Why should anyone feel alone in their pain… when everyone is actually hurting too? We all understand each other because of pain… yet we choose to divide and isolate because we think no one cares or understands… how very wrong we all are in that thought…

BATTLING
November 3, 2020
LET’S TALK
BOOKS
TWEETS
Candice Rijavec @candicerijavec Probably wrong for me to like this but it's so funny 😅😅 https://t.co/IkHfj7qSeN