Never Be Ashamed Of A Scar 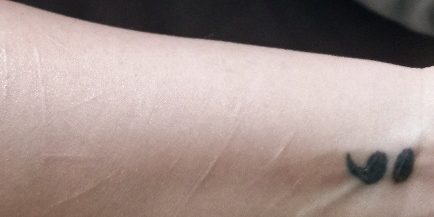 NEVER BE ASHAMED OF A SCAR. IT SIMPLY MEANS THAT YOU WERE STRONGER THAN WHAT TRIED TO HURT YOU.

Yes, this is a photograph of my arm. I’m not oblivious to the looks I get when people see it. Akward stares; thoughts racing through their minds. At first, I felt so ashamed. I knew what people were thinking. No one has ever asked yet… so no one found out the real story behind them. They are reminders of so much more than what people assume.

So what are the scars from? Three things:

#1. Cutting. Yes, I USED TO cut. That’s been left behind me so far into my past. My “cutting” scars were never really noticeable once healed… it was as if I hadn’t done anything at all. I am not that person anymore. I used to cut because I was simply “never good enough” and I needed to punish myself for “not being good enough.” I believed people’s words about me; and yes, I still battle… but I do not cut. I have come far… very far… from who I used to be because of the life I once lived.

#2. A very dumb tree climbing challenge. One slip of my foot, I grab onto the branch as it shreds my skin as I fall to the ground. It was unbelievably sore but I laughed. It was a very dumb attempt.

#3. The third reason… is one thing most people would never imagine it being from. Scars, horrible scars, from protecting someone I love. Arm scratched til it poured with blood and an almost broken rib cage, and too many bruises. I protect who I love, and that’s what I did and that’s actually what these scars are mostly from.

No one would ever think that these scars are actually “battle wounds”. First immediate thoughts go to “cutting.” I will never deny that I used to be a cutter. And despite the looks I get from people, knowing what they are thinking, I have learnt to ignore it and not be ashamed. But it has become more challenging now because, as I seem to have become “known” more publicly, the number of “looks” has multiplied significantly. I know what my scars are from… and I won’t be ashamed, no matter what people assume.

I am not worried about trying to heal the scars anymore. I have tried. They just don’t seem to heal. But that’s okay. They are reminders to me… reminders of a life I had once lived and more so, reminders that scars are insignificant to being able to rescue and save the ones I love from being harmed. Scars mean nothing to me; those I love mean everything to me. I know the cost it takes. Aside from scars, I have other major injuries because of putting my life on the line… why? I love to the full extent. There is nothing I wouldn’t do for the ones I love; no matter the cost.

Whatever scars you carry, visible or not, and whatever your story is behind them… don’t be ashamed. It doesn’t matter what people say or think. You know YOUR SCARS; you know YOUR STORY behind them… and mostly, let them become reminders that you are stronger than what tried to hurt you.