The Krugersdorp Killers. A Dent In My Life 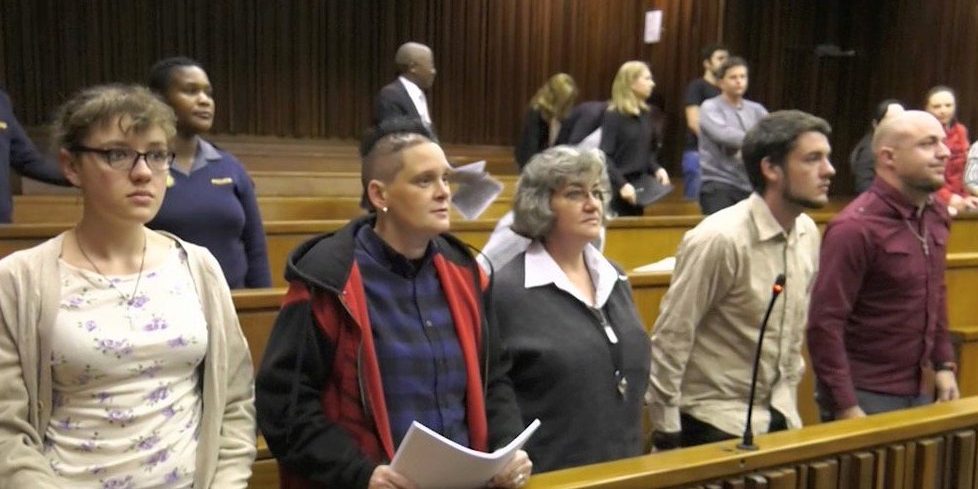 When I think about this part of my life, too many thoughts come rushing back all at once; so many thoughts that I honestly don’t even know where to begin when it comes to talking about it. I am yet to start writing my new book, The Best Friend… Why? Two reasons: I am finalizing the editing on Leviathan Walks (which was merely the mid-part of this 12 year period of my life) and then, there is just, simply, TOO MUCH to say when it comes to the Krugersdorp Killers. Where do I begin and where do I end? How do I explain to people what EXACTLY went on during that time period? Would people even begin to come close to understanding the extent of the manipulation and everything else that went along with it? I doubt it… but I’ll try either way.

I honestly wish I could turn this into a “plug and play” moment for people. Take a computer USB chord, plug it into my brain and into theirs, and then let them watch and feel every tiny detail, of every tiny moment… I think that’s only when anyone could ever begin to understand. Unfortunately, technology hasn’t advanced that far… at least, not that I know of.

Just over an ENTIRE DECADE of my life, turned upside down and inside out by the Krugersdorp Killers. Wow. Yet, it didn’t even feel like it was as long as that. Sometimes when I think about it, it feels like it all happened only yesterday.

Looking back at it all now, which is the starting point of the majority of the world, it’s SO EASY to assume that everyone who knew this group was, plainly, a bunch of gullible idiots. How could we be roped into such nonsense? How did we not see what we were getting into? How? How? How? Yes, we look outright stupid but that’s only because you know the “result of it all” now, after it has all been exposed. But, yet, going back to the beginning of it all, I could honestly not count more than a handful of people that were not fooled into all of this – that’s how masterful this whole scenario was.

It’s “a spiderweb put into a blender” type scenario. That’s the only way I could ever accurately describe it. It ONLY makes sense to those who were part of this insanity; but to the rest of the world, well, it’s utter confusion.

I have seen so much of what has been reported in the media about the Krugersdorp Killers, including books that have been released about it too. Sadly, all of this only covers a mere 5% of the truth (if even that much)… and some minor inaccuracies here and there as well. The only thing that is ever spoken about, is what happened during the investigation and trial period in the Johannesburg High Court. That’s all. No one has spoken about how it all started, what went on behind the scenes, how everyone functioned from day to day, the extent of the manipulation, the fear, the utter confusion, the brainwashing, and the list goes on. And those that used to be part of this, do not want to speak up; they have gone into hiding, pretending as if it all never existed. I wish it had never existed but then again, this decade of my life has molded some very important strengths within myself. If I knew then, what I do now, would I have avoided it altogether? Hard question, honestly. Yes and no. “Yes”, because, simply, who wants to be used, abused and manipulated, resulting in a life so utterly torn apart by it all? And, “No”, because then I would not be able to help put a stop to it destroying anyone else’s life. Either way, I can’t go back and change the past, so there’s no point dwelling on it.

I have faced one main (repeated) question regarding all of this: Weren’t you scared? Honestly, no. I don’t know why, but no. I know my name was the first on the “to kill list” for an overkill murder. I knew that since 2012. But no, I haven’t been scared. I have received numerous text messages over the years, including to date, from this group of people trying to find me to kill me. But no, I wasn’t scared. Okay, honestly, the most recent text message received, did rattle my nerves a fair bit. Maybe it was finally a delayed response. A very delayed response. But through the previous times, and previous years, perhaps it was all trauma dissociation – a total cut off from reality in order to cope? It’s the only thing that would make sense. I knew I was supposed to be killed in the most horrific way… for years… but the reality never hit me. Never. It seemed surreal.

But now, even though this case is “done and dusted” and this group is behind bars for numerous lifetimes… this story continues through the media, and it will more than likely continue for years thereafter. I was told that this has been labelled “the number one group killing in South African History” and “the number two group killing in all of the World’s History”, so obviously, this is going to be spoken about for many years to come. I am not tired of talking about it, but it does sometimes get tiresome trying to explain how “all the dots connect together” in order to make sense of it all. But underlying all of that, I honestly and truly wish that people could know more than what has just been reported in the media… more than that 5% of information. I want people to know the FULL TRUTH of it all. During the case, I wanted to speak up for justice for the victims, and at the same time, I want to speak up for those that were used through it all, as well. I want people, simply, to understand. There is SO MUCH MORE to all of this than ANYONE knows; only those involved know the full extent of everything. It is like living in a horror movie, yet I doubt Steven Spielberg and Stephen King would even dare make a movie “this bizarre”.

Unfortunately but yet, also, fortunately, I have a VERY different side of insight to this whole story that no one else has. I was, after all, and I hate admitting this, to be honest… I was the best friend of Cecilia Steyn for four years. I know that only because I had left Cecilia Steyn, that Marinda Steyn then became the new best friend. If I had of stayed, I know I would still be “the best friend”… and I do not want to even dare ask if I would have ultimately ended up being the one in Marinda’s shoes at the end of it all. I doubt it though, very highly doubt it, because I would never be capable of taking anyone’s life. So, I more than likely would have ended up being killed and then Marinda would have still, ultimately, become the new best friend.

I remember watching Marinda, appear before all those in the High Court at the end of her sentencing. She stood there, staring at the cameras flashing at her and people making comments. Honestly, in that moment, I broke. I broke so deeply within myself. I know the full extent of the lies that she still believes are true, and then, I also had a moment where I realized, “What if that could have been me?” So fooled? So brainwashed? An ENTIRE life destroyed? Now, sentenced for numerous lifetimes. But I am also torn in saying that because Marinda had admitted to enjoying killing people – something that I did not even dare think she was capable of doing in the first place, never mind actually enjoying it. In fact, the time period where I was first supposed to be killed, Marinda more than likely would have been the one to have killed me. New best friend versus old best friend. Wow. Almost like a jealous vengeful scenario at that too; I say that because I know Marinda hated me because she was jealous that I was Cecilia’s best friend in the beginning. She was obsessive over Cecilia since day one. But, in all honesty, she can have that “title”. I don’t want it. I hate even admitting that I was actually the best friend of a mastermind serial killer anyway.

I can talk for hours, once I start, on this whole scenario. I know FAR TOO MUCH. I know I do. Cecilia, after all, wanted to kill me because she knew that too. I can go into intense detail and then divert and dash onto other topics, within this topic, all simply because SO MUCH happened ALL THE TIME. It’s a mind map waiting to happen.

It was all, simply, a dark whirlwind around you that continuously spun so fast that you had no time to actually make sense of anything, so you just carried on blindly following orders.

But, for now, before this becomes a book, I am going to end off. I will get to writing my book after I have finished the other. Sadly, Leviathan Walks would not even exist, nor every scenario and situation in that book, if it wasn’t for Cecilia Steyn. Dumbstruck…. just over an entire decade of my life, literally molded by Cecilia Steyn; a mold that I was forced into but fought to get out of.

“Plug and play” moment… I wish you could understand. But if you let me, I’ll try help you, because, simply, there is FAR MORE… FAR, FAR, FAR MORE… than you know or than you could ever imagine that actually went on…