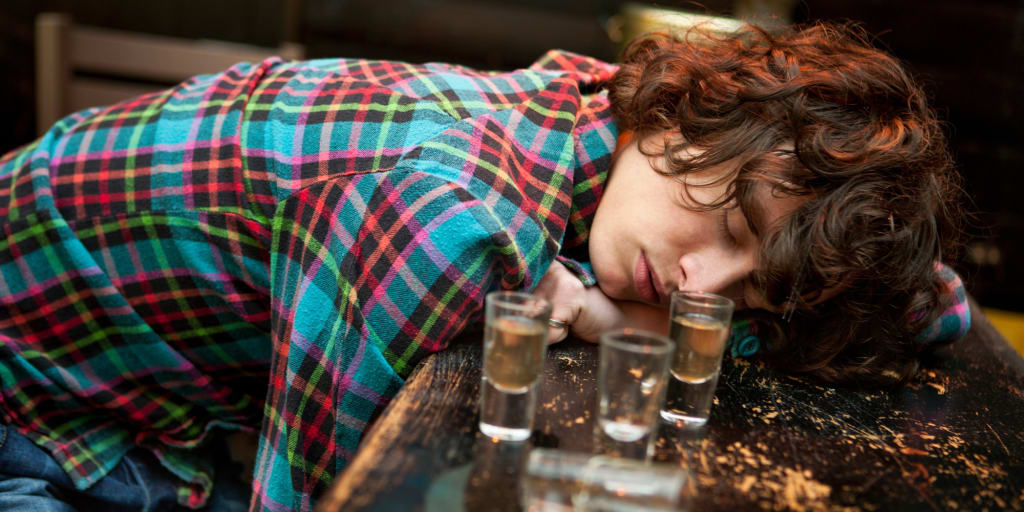 I have spoken to numerous people who often, if not daily, indulge in drink after drink because, to quote them, “I can’t have fun, if I don’t drink!” Really? I know life can be chaotic and stressful, but can’t you find the joy in simple things like enjoying the company of people you love, activities like theater and movies, bowling, music, art, sport, reading, or just simply by staring at the world around you and taking a deeper look, to enjoy its beauty and the amazement of how it all works?

Some people have even gone as far to say that, “I’m only funny when I drink!” I find that hard to believe, especially since the people that had said that, were quite capable of cracking jokes and funny punch lines, all while being sober. Are you maybe then just not around the right people? Or you don’t realize that you are actually funny? Or is just an excuse? And added, yes, there are plenty of people out there who can’t really crack a joke or anything of the sort BUT, surely, they do know people who are funny and can then enjoy their sense of it too? I, personally, know people who run dry humor department, but I enjoy their company and it’s a bonus if I can make them laugh. I’m perfectly happy either way.

Why drink to get drunk? Honestly, to me, it’s not really funny. Especially, more so, when carried on to becoming recklessly drunk.

I’ve grown up with alcoholics in the family and knowing a fair amount of them too. NO THANK YOU! As soon as someone becomes drunk, that’s when I look for the exit! It doesn’t matter what “type” of drunk they become. I’ve experienced many “types”. All of which made me want to run. Once a person loses sense of self control, and just “sense” in general, I start making my exit plan because something bad is bound to happen… and I’m not going to stick around to be a target, or the one picking up pieces.

This could be purely because, in each of any past drunken scenarios that I’ve encountered, I ended up being hurt… badly!!! But from afar and from scenarios that I have heard of, constant drinking ends in disaster, some way or other. Maybe not for you, but for someone else. Maybe not now, but eventually.

Yes, I drink. But rarely. And when I do, it’s usually not much. I say “usually” because I have to watch my blood sugar level and then there have been scenarios where I was hooked on enjoying the flavor of the drink, or plainly, it tasted like cooldrink and I would gulp it down. Now, for me, and despite those scenarios, I have actually NEVER been drunk. I have, at most, twice, been tipsy. I don’t like it. I don’t like feeling out of it, even though it was only a little. I have, what doctors have summed up as, an overactive liver. They think this is the reason it’s impossible for me to become drunk (or for medicine to work); or, if it’s not my liver, then my “willpower” overrides any potential oncoming drunken state. I have tested both theories numerous times, and I honestly believe that it is more so my “willpower”… most of the time. Yet, I also cannot say that is entirely true because in several situations, in my life, after utter devastation and desperation for even momentary escape, I have tried to get drunk, but NOTHING happened. People that have seen me drink, often say that it’s as if I had been drinking water.

Let me tell you about some scenarios…

Three times proved. In three times of utter devastation, I decided to try DOWNING an entire 750ml bottle of pure 43% vodka. I desperately wanted to numb my pain. I WANTED to get drunk, or pass out. But all it did was burn. Yes, in those moments, it was disappointing and frustrating. I had no escape for my pain. In one of those scenarios, I then also decided to DOWN a 6 pack of beer. NOTHING. This definitely goes against my willpower.

When I met my one ex, we ended up at a pub… which turned into pub crawling. Potent drink after potent drink, was handed to me. As soon as it was finished, I was handed another. This carried on for almost 24hrs straight. I was perfectly sober by the end of it, while my ex was barely able to stand and eventually passed out. It was actually the first scenario in my life where I had ever drank so unbelievably much. I rarely ever touched alcohol, so my body was not used to it, in any tiny way. The only thing that DID result from it, was feeling like my stomach was eating away at my stomach. I had been drinking, non stop, on a completely empty stomach, from the very start of it all. Willpower or over active liver? No idea.

In another scenario, where I was heavily “pissed off” at someone (long story), I eventually decided to take off to a park with 3 MINOR drinks, which I had had numerous times before, up until then. Half way through the first drink, I actually got tipsy. Go figure?! My aim was NOT to get drunk, I merely liked the taste of the drink. I drank all 3 bottles… still only being tipsy by the end. But because I had to drive back home, as it was getting dark, I had to sober up first. I decided then to see if “willpower” would work. I remember telling myself, “You don’t want to be tipsy anymore. So stop.” Done!?!? It was gone! I have done this at least twice, and both times, leaving me dumbfounded. Willpower worked.

But I’m off topic now. Yes, I hate drinking to get drunk. I despise it, actually. For both myself and people around me. I will run like hell is chasing me, and it will be long before I even consider “hanging out” in scenarios like that again. Actually, no, I won’t ever again. I have had enough of drunken pain inflicted memories. No thank you. And I definitely do not want reminders of them, or having to brace myself for new scenarios either.

As for those who aim to get drunk… for fun, to be funny… I don’t understand, nor will I ever. I can find happiness and laughter in many other ways… ways that don’t involve any type of disaster or pain.

I do understand alcoholics battling to break the addiction. I understand addiction… not in alcohol, not in drugs, but in other facets of life. Breaking a cycle… well, to be raw and honest, it’s hard as fuck. Each time you are tempted to go back to that drink, please try remember the harm it caused and please also remember the struggle it took, to get you to where you are now.

This topic can go on endlessly, and I’m finding that my blog posts are flooded with, “Why’s?” at the moment. Not because I am dealing with these issues currently, but I have in the past, and I regularly take note of the people around me. I always first try understanding “Why?” BUT no reason I’m given, or no reason I find, even if it’s a list, actually make sense to me… when it comes to needing alcohol “for fun”.

Maybe I am more different to most people than I realize? I have been told that, too many times to keep track of, in my life. At the end of the day, I am and will always remain me. I will try always understand, even though most times I am still left confused… most times it’s because I don’t think the same way.